Meeting for May 2020: Transforming Canes

It’s almost time for our May meeting! It’s coming up Saturday, May 9 at 1:30 pm CDT. But wait… can we meet in person? Do we have to cancel? Will anyone even come? Here’s the good news! Even though meeting in person is not advisable yet due to so many of our number being in the high-risk category for the virus, we CAN meet virtually. We had so much fun with our Mini Virtual Retreat that we have decided to have our May meeting on Zoom. And our special guest this month is Debbie Jackson! How cool is that?

Debbie’s topic is Transforming Canes. She is going to show us “how to create a collection of patterns from basic Bullseye Canes and learn a variety of ways they can be used in projects.” I have a feeling Debbie’s going to have some amazing ideas that we haven’t seen before. The photos above are a sampling of things to be made with these techniques.

The supply list is simple and will be posted here early next week. You can just watch or you can clay along with us! One thing you will need is some Bullseye Canes. If you are new to polymer clay and want to know how to make them, here is a YouTube video you can watch. More details will be posted soon.

We will be using Zoom Cloud Meetings again. If you don’t have the app, be sure to download it to your computer or mobile device before the 9th.  (Scroll down for mobile apps.) If you can set up a laptop or your mobile in your workspace so that you can clay with us as Debbie shows us what to do, that will be awesome! Otherwise, you can just watch and try the techniques later. To avoid “Zoombombing,” I will be emailing the meeting ID and password to members and others who wish to attend. Please use the contact form to get in touch with me if you are not a member but would like to attend this virtual meeting.

Minutes for the March 2020 Meeting

President report :  I have email arts Institute about renting room on an ongoing basic still waiting to hear back

Ask Jane to check on Hobby Lobby in Moore

The May meeting after retreat will be at Bettys house, we will talk more about a new place.

Vice Pres is Vacant we need a VICE Pres!!

May: finishing up on retreat projects

New business  still looking for a place to meet

Inchie in April at retreat

Betty will be teaching us how to make roses and will demonstrate several methods to create a rose. She will take us step-by-step through creating this beautiful rose pendant as our project. You will have the opportunity to make a slightly different pendant if you prefer. As an alternative, you can bring a box or a container such as the ones we made last month to which you can attach your roses. 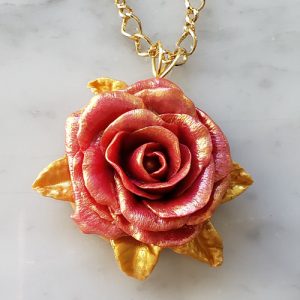 Your clay can be any color you choose for your rose. You will have the opportunity to practice making several roses.  You’ll get a more realistic look if you mix your rose color equally with translucent. You can also use a skinner blend or light, medium, and dark shades. Please have your clay conditioned and colors mixed ahead of time to save time in class. Any color can be used for the bezel and leaves. 18K gold was used for both in the sample.

The edges of the rose petals can be colored using mica powder such as PearlEx or chalk pastels. A darker color, contrasting color or metallic add more interest. Mica can also be used to make the bezel look more like metal.  Some suggestions to get a metallic look: PearlEx Brilliant Gold on 18K Gold clay, Aztec Gold on Gold clay, and Macropearl on Silver clay.

Clay – color of your choice for rose, bezel, and leaves.

The following tools are optional, but can be nice to have:

Minutes for the February 2020 Meeting

Connie Farrell, our new president, called the February, 2020, meeting to order. The meeting took place at Betty Bolerjack’s house once again. Six members were present along with one visitor. Penni Jo, Lee Ann, Tom, and Jane brought items for Show and Tell.

Lee Ann taught us how to make molds of virtually any shape container which can then be made into a decorative polymer clay container by adding layers of clay to the inside and out of the mold along with any other embellishments desired.

The minutes for the January 11 meeting were approved. Tom made the motion and Lee Ann seconded. Our secretary is still not able to be with us, so Betty agreed to record the minutes this month. Katherine is unsure how much longer it will be before she can rejoin us. We need to find a new secretary. Any volunteers?

Penni Jo shared the info on programs for the next three months. Betty will teach how to make roses in March, April is our retreat, and we will have a “Let’s Finish It” time in May to finish any projects that we weren’t able to complete at our retreat or other projects that you would like to work on.

Jane brought the 2019 Polymer Journeys to be placed into the library. Polymer Arts Project – Organics has not yet arrived.

Tom reported that we have 18 registered for the retreat. Seven of those have not signed up for the classes. Angel has received some gifts from sponsors.  These include Basket Market and Tinker Federal Credit Union.

Connie discussed getting more exposure by doing demos at places like the Yukon Library as well as holding classes for the public at Hobby Lobby in Yukon. We will discuss this more in-depth after we again have a permanent place to meet.

The winners of our January drawing were Angel, Connie, and Tom. They will need to bring bags for our next drawing in March.

Lee Ann will be teaching us how to use glass containers to create molds.  She will have more examples at the meeting. 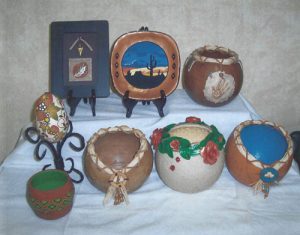 President Betty Bolerjack called the meeting to order. We met at her house for our January meeting and nine members were in attendance. Lori, Kathy, Penni Jo, Connie, and Betty brought items for Show and Tell.

Tom brought some small bottles for us to cover for Bottles of Hope and some wonderful ones were made! You can see a video of some of those in progress on our Facebook page here.

The minutes for December were approved. Penni Jo made the motion and Lori seconded. Since our secretary was not able to be with us, Penni Jo agreed to take the minutes this month and was helped by Connie. Betty agreed to write them up. Team effort!

Shirley was not available to update us on the upcoming programs, but Betty had the information. Lee Ann will be showing us how to make vase molds at our February meeting and Betty will teach us how to make roses in March. Our retreat is in April. The new VP will set the programs after that.

Lee Ann gave the Treasurer’s report. We ended the year with 26 paid members. We have 11 who have paid for 2020. Several of those paid at the meeting.

Jane gave an update on the Guild Library. The 2019 Polymer Journeys has arrived. Organics is on the way.

New officers were elected for 2020. The members Betty had contacted about holding an office declined which left us without a ballot. After much discussion and cajoling, Penni Jo offered to be Vice President if someone would take the job of President which Connie volunteered to do. Kathy made the nominations official and Angel seconded. Connie and Penni Jo were unanimously elected. Katherine had thought she would be back and would continue as secretary. No one has heard from her, so it was decided to wait on a decision for the position of secretary until the February meeting.

The rubric for State Fair judging was discussed and it was decided that we will get together with Chris Crossland at the Retreat to hammer that out.

Because of changes in Betty’s circumstances with New Day Church, it was decided that we will continue to meet at her house until we find out something about the new Arts Center. Other options for a meeting place were discussed. The Yukon Library is always a backup, but we can’t have our ovens there. Connie has checked into the Will Rogers Garden Exhibition Building. There is a one-year waiting list to get a room there, but she will check into putting us on their list in case we can’t get back into the Arts Center. Betty will check to see what Bethany First Nazarene’s policy is for groups to meet there. Angel will check into the possibility of meeting at Tinker.

Tom addressed the need to work on the letters to request sponsors for donations for the Retreat. Angel has already contacted some. It was also discussed to get a UPS box at $30/month for the deliveries that will be arriving. Other options were discussed including deliveries to someone’s home who is home much of the time. Betty volunteered to use her address and it was agreed to by unanimous consent.

Betty showed the new website with the options for registering for Retreat. We will be using PayPal to process payments. Since we will be having to process payments for the rooms in addition to other Retreat items, we discussed whether we should charge extra to cover the PayPal fees. Penni Jo moved for the Guild to cover the fees and Angel seconded. Motion carried. Part of the issue with the website was not having the ability to put multiple options for the rooms in just two listings instead of needing to make a listing for each option, e.g. the number of people in a room. It would be $49/year for a plugin that will give the ability to choose how many in a room which will make it easier both for Betty and for those registering. Penni Jo moved to purchase the plugin. Connie seconded. Motion carried. It was decided that we would have a 30-day cutoff for the Early Bird price after we open Registration to the public. The member coupon will be good the entire time. Tom will send out emails to the members as soon as Betty can finish the website which will be within the next week.

Betty mentioned the need for a Publicity Person and offered to take on that job. She will set up a Facebook Group for the Guild, create events for meetings and the Retreat, and will do Lives from time to time to help promote the Guild. Connie will work with her on other ways to promote the Guild.

We held our bi-monthly drawing. Tom, Betty, and ?? provided bags. The winners were Angel, Connie, and Tom. They will need to bring bags for our next drawing in March.

Betty reminded everyone that has not paid their dues yet that they are due now.

Meeting for January 2020 – Bottles of Hope

This month we will be making Bottles of Hope as a group.  Bring whatever embellishments you need to make as many bottles as we can for donation.  We will have several sizes of bottles to cover or you can bring your own.

Plus anything to give your bottle curb appeal to possible recipients

And lots of imagination.

Any clay and any colors you prefer. You can use the sizes below to determine amount needed to cover the bottles we have plus an extra amount for a top.

or 5 playing cards thick is usually a good thickness to work with.