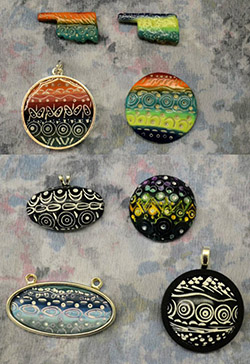 Our next meeting will be Saturday, October 10, 2015 from 1:30-4:30 p.m. in the Contemporary Arts Center at the fairgrounds. This is our raffle month, so if you won something in the last raffle, remember to bring an item for this one! We will also be trading inchies this time, with a Fall theme.

Angel Mance will present a fun demo of tribal-inspired designs at our October meeting.

Clay colors of your choice in small amounts. We will be making cabochons from molds, or pendent shapes.  For the color blended technique bring small amounts of colors that you feel would make a nice blend. Angel got out all of her small pieces of clay and had fun using them up!

The supplies listed below are not required, but if you have them, bring them! Our group is pretty good at sharing!!

We had 14 members and no visitors at the August 8, 2015 meeting. Many members brought Show & Tell items (see photos here).

The dynamic duo of Penni Jo & Jane presented “Harvest Moon Light switch Cover” designed by Penni Jo.    Together they presented a great project, with details, tips, techniques, directions, and patterns.  A BIG Thank You to both Penni Jo & Jane!

Minutes from the 7/11/2015 meeting were approved, Tom motioned and Jane seconded the motion.

Connie opened discussion about programs for our future meetings. She suggested that we go over the guidelines for teaching projects seen on the internet, in books, picture tutorials etc.  Teaching is intimidating to members because the guidelines are unclear. Connie has struggled to get members to commit to teach due to these difficulties and wants the next Vice President to have an easier time of it!  She talked about “follow along projects” where the group is following published instructions or a picture tutorial together with the follow along leader offering their experience from having already completed the project.

November is an inchies month; the theme is “Fall.”

Angela sent the treasurer’s report. We have 24 paid members.

Librarian Jane reported that we received two magazines: Polymer Café and Polymer Arts. The molds discussed last meeting as a $25.00 purchase are to come next month.

Web Master Myra reported an issue with the website being unavailable; she determined it was due to a database problem. The issue has been resolved. A suggestion was made by Penni Jo to take down 2015 retreat info and put up new dates.

Bottles of Hope coordinator Nance was not present.

Reminder: October is a Raffle month.  Winners from August were Tom X2, Angela, Laura Connie X2, Penni Jo and Jane. They will bring the raffle prizes!! 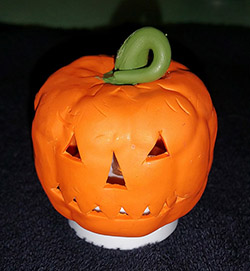 Our September meeting will be in the Story Time Room at the Moore Public Library (225 S Howard Ave, Moore, OK) instead of our usual meeting place, due to the State Fair. For those unfamiliar with Moore, here is a map.

Connie will present our project for this month – a jack-o-lantern illuminated with an electric tea light.