We had 12 members and 2 visitors at the July 11, 2015 meeting. Show & Tell items included Fourth of July inchies from 6 members, BOH with herringbone cane taught at our last meeting, Helen Breil style pendant, Best Flexible Molds new additions, earring, and a new Premo color Golden Glitter!  Lori also brought many samples of artwork from her Mixed Media cruise / Bead & Button show.  On the cruise Lori entered a drawing for guilds with the prize being a goody bag, and won! After some discussion we decided to lay the contents out and draw numbers for choosing an item.

This month Kay demonstrated shape and texture earrings.  The demonstration was organized with clear written directions and pictures.  Thank you Kay!!

Minutes from the last meeting were approved, Laura motioned and Jane seconded the motion.

Vice President Connie was not in attendance so Penni Jo gave an overview of the upcoming programs:

November is an inchies month, the theme is Fall.

Angela gave the treasurer’s report. We have 23 paid members.

Librarian Jane indicated that we received the back issues of Polymer Arts.  She asked for suggestions. Angel asked about purchasing some Best Flexible Molds.  The group discussed this option and thought it would be a great idea! The details of this are being worked out.

Web Master Myra was not present.

Bottles of Hope coordinator Nance was not present.  Angel brought bottles for covering.

Reminder: August is a Raffle month.  Winners from June were Marsha, Tom, Angel, Victoria, Debbie and Angela. They will bring the raffle prizes!!

Our next regular meeting will be August 8th, 1:30 pm at Oklahoma Contemporary Art Center on the OKC Fairgrounds. 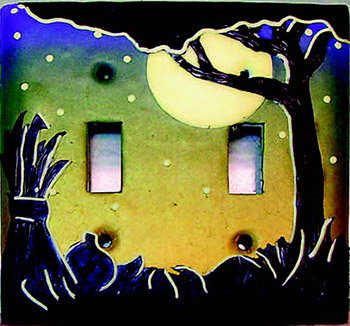 Our next meeting will be Saturday, August 8, 2015 from 1:30-4:30 p.m. in the Contemporary Arts Center at the fairgrounds. This is our raffle month, so if you won something in the last raffle, remember to bring an item for this one!

Penni Jo and Jane will be showing us how to make an adorable Harvest Moon switchplate cover that has glow-in-the-dark elements.

NOTE: Our September meeting will be at the Moore Public Library (225 S Howard Ave, Moore, OK) instead of our usual meeting place, due to the State Fair. For those unfamiliar with Moore, here is a map.