This month Cheryl will be doing a large wooden ring celebrating spring. She needs us to do some “homework” before the meeting so she can concentrate on the components during the meeting.

Please cover your candle ring before you come. I would suggest a green for grass. You can cover the ring with foil to achieve a more realistic “ground” and then cover with green clay.

The meeting will be held at the City Arts Center (which has just been renamed the Oklahoma Contemporary Arts Center) at the State Fair Park (3000 General Pershing Blvd.) on March 9th from 1:30 to 4:30.

This is inchies month so bring as many as you can! The inchies theme this time is BLUE – from the color to the mood, and anything in between. (Thanks, Tom, for the tagline!)

Tom opened the meeting.  There were 18 in attendance including one visitor, Janice.  We began with Show and Tell.  Nance displayed her fossil pendant that had a tooth that was 311 million years old and a piece of tusk that was only 8000 years old.  They were embedded in a polymer “rock”.   Lee Ann has been experimenting with faux jasper which she displayed.  Penni Jo shared the orchids that she made for a class she taught in San Antonio and an old pocket watch which was made into a three bears’ picnic complete with baby bear flying a kite that could be moved.  Tom showed a custom stamp.  You will be able to bid on a custom stamp at the silent auction during our retreat. Cheryl presented a tin covered in variegated polymer extrusions.  Lori shared fossil molds she made.  She will be doing a demonstration on the technique Thursday at the retreat.

Jane presented this month’s program, Magic Beads.  She showed how to join the beads to increase their size and how to cut them into desired shapes.  She displayed several different methods of covering the beads with polymer and various inclusions.

May – to be announced taught by Lee Ann

Angela gave the treasurer’s report.  There are currently 22 members.  Membership renewal monies are due in January.  Angela will be accepting payments today.

Jane shared the three new magazine issues we have received.  The Polymer Cafe challenge this month is “Celebrate.”

In old business, Lisa suggested that we bring inchies for our bimonthly swap.  Inchies are similar to artists’ trading cards.  They are an inch square and not more than a fourth inch thick.  We agreed to try it next month.  Lisa will handle the distribution.  The theme for next month is “Blue.”  Please bring inchies in increments of five.  You will receive back the number that you bring.

Penni Jo reported on the up-coming retreat.  Myra will work with Bob Linn to be sure we have items needed for printing.  Ruth is ordering table covers.  Lee Ann will bring the fabric for the display table.  Jane is working on the meals.  Tom has ordered the ovens and they have been received.  We currently have 24 vendors and persons who are donating to the goody bags, door prizes or the silent auction.  Tinker Credit Union will again donate the bags to hold our goodies. We will stuff goody bags Saturday, April 6th. The inchie exchange at retreat will keep an “open theme”.  Please bring inchies in increments of five.  Tom will be the MC for door prizes.  Shirley is handling publicity.

In new business, Angela recommended we have a consultation with a tax accountant regarding our non-profit status since our treasury is increasing.  Penni Jo made the motion to do so; Tom seconded it and the motion passed.  There was a question if donations could be made to maintain the non-profit status.  If so, several ideas for donations were recommended including specific disease research or art projects.  Angela will meet with a tax accountant and report back.

We discussed reducing the membership dues of the person who heads up the annual retreat.  The general agreement was this is a good idea due to the amount of work involved.  Angela will look at the membership discounts and we will discuss the particulars at the next meeting.

Angela also shared that the Eufaula Art Walk has asked if the guild would be interested in participating.  It is the first weekend of October.  She will get more information and bring it back for further discussion.  Nance suggested that projects creating Bottles of Hope might be a good demonstration or hands-on experience.

Tom, Penni Jo, Marsha and Janice were the beneficiaries of this month’s raffle.  They will bring prizes for the May meeting.

The meeting was adjourned.  Next month’s meeting will be Saturday, March 9th, at 1:30 pm at the OKC Art Center on the fairgrounds.

In February we will be making Magic Beads – not to be confused with Jack’s beans that we could climb. These are light-weight hollow beads that can be made in almost unlimited shapes and designs. For those who want to go further, we will also venture into pendants. 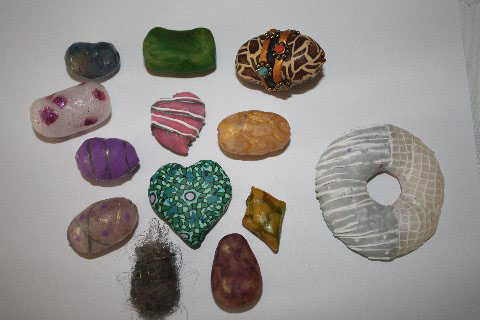 Favorite alcohol ink color(s)* with the items you need to use it, such as plastic gloves, applicator (i.e., Q-tips, sponge wedge, felt applicator-?)

*If you don’t have these, I have them and am happy to share.

Veil or crackle cane, if you have any from our meeting