Our next meeting on August 8, 2020, at 1:30 pm, will be at Unity Church, 5603 NW 41 st., 73122 (across from the Putnam City Administration Building). We hope to see you there! For those who can’t attend in person, we will once again be doing a Zoom meeting. Details will be posted in our private Facebook group and sent out via email. If you will be joining us as a guest on Zoom, please contact Betty here to get the Zoom info.
Connie will be showing us how to make air plants and baby’s breath. 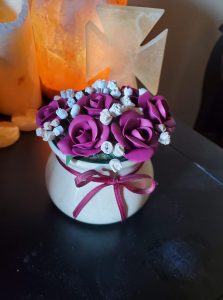 Note that the middle air plant is real!
Supplies for baby’s breath and air plants

Minutes for the July 2020 Meeting

The minutes were approved as posted.

Lee Ann reports that we still have 18 paid members.

Betty will make another FB group to help market our group. She needs us to help post on FB group pictures, ideas, tips, tools, classes, tutorials to make it fun and inviting! The other FB group will become for members only.

We discussed ways to build attendance, add new members, and get more people to step up. We still need a vice president and a secretary! Betty and I have been doing both along with our other duties.

We had a drawing. Betty and Tom won and will bring gift bags for next drawing in Sept. If you won previously, please bring a bag as well in SEPT.

No state fair this year.

Aug. Connie Farrell will be doing the class on air plants and baby breath.

Meeting for July 11, 2020: Wings and Tails from Angelina Film

Our next meeting will be at 1:30 pm on Saturday, July 11, 2020, at Betty Bolerjack’s home, 6712 Randi Rd, Oklahoma City. We look forward to being back together again but we will also be broadcasting over Zoom (contact Betty here for more info) for those who cannot attend in person. Hand sanitizer will be available and there is plenty of room to spread out. Though not required, feel free to wear a mask.

Tom will be doing a demo of Angelina film for wings and tails. There are many variations and styles of wings that can be made. Following is a list of the items he will be using:

Liquid clay – can be any color, but a color that contrasts with the Angelina Film is preferable

Ironing board or heat resistant surface

REMINDER: This is Inchie month. Bring Inchies to trade. The theme is Summer.  This is also Drawing month. If you won a bag from our last drawing in January, please bring one this time.

Minutes for the June 2020 Meeting

The June 13, 2020, meeting of the Central Oklahoma Polymer Clay Guild was called to order by President Connie Farrell. It was held via Zoom and we had a total of 15 in attendance: 13 members and 2 guests.

During Show and Tell, Connie showed a Cosclay air plant that she had made and Tom showed us several parrots that he has been working on. One of them was a BOH that had angel wings and tail made from Cosclay.

Our program was presented by Deb Hart. She showed us how to create her art deco cane, how to create tube beads, and then how to apply the cane to the beads.

A discussion was held regarding a place to meet as Connie still hasn’t heard from the Oklahoma Contemporary Arts Center. Tom had heard from them, however, and said it doesn’t look promising. Connie checked with her church and we should be able to meet there most of the time. She is going to talk to them some more. Betty is going to clarify the policy with her church. Meanwhile, we will begin meeting again in person at Betty’s house, starting in July.

Since we still don’t have a Vice President, Tom agreed to teach us how to make Fairy Wings in July. We still need August and September. Connie offered to show us how to make baby’s breath and her air plants but no definite date was established.

Bottles of Hope are still not being delivered due to Covid-19. However, continue to make them so that we have plenty when we can once again deliver them to the cancer centers.

Lee Ann had problems with her connection so sent the Treasurer’s report after the meeting via text.

Our Webmaster, Betty Bolerjack, has set up an email list on MailChimp to make communication of important information easier.

There was no other business.

July is Inchie month with the theme Summer. It is also Drawing month. Our last drawing was in January. Angel, Connie, and Tom were the winners so should bring gift bags to the July meeting.